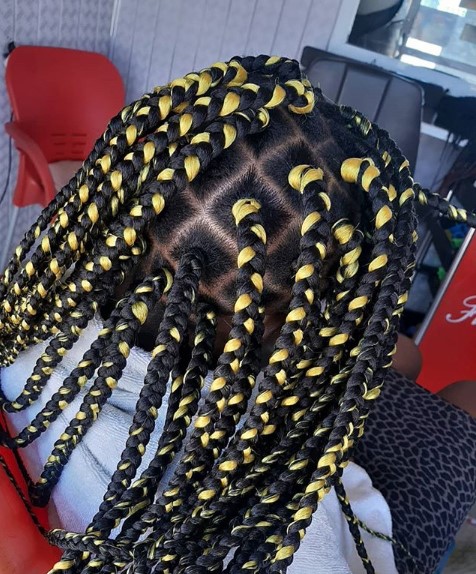 Deborah Laryea, a 1st Class graduate in Environmental Science from KNUST has become a house-to-house hairdresser.

The brilliant young lady who graduated in 2018 was excellent during her national service but did not get a job, which made her decide to start a hair braiding business

With no prior experience or training, the lady simply started using her imagination and is gradually becoming highly sought-after, although she still desires to get a mainstream job

A young graduate of the Kwame Nkrumah University of Science and Technology (KNUST) with First-Class Honours in BSc Environmental Science has started her own business.

In a short interview, the lady by name Deborah Laryea decided to start making hair from house-to-house for ladies.

Interestingly, Deborah indicates that the styles of hair she has been making are purely from her own imagination as she never learnt the skill. “I imagine it and my hands replicate my imagination,” she says.

Deborah graduated in 2018 and completed her national service in with Ghana Manganese Company Ltd as a Health Safety and Environment officer where her performance was also excellent.

Sadly, she was not recruited after the national service and has been job hunting since then. In her own words: “I am still searching for a mainstream job but I have taken to going to people’s houses and shops to braid for them. I never learnt to braid. It came to me naturally”.

It is rather admirable that unlike many young graduates who would simply sit home when they are unable to get a job, Deborah decided to put her hands to use and is making something for herself at least.

In another interesting report about a young graduate who started a different business. Doris Obenewaa Darko, a Ghanaian food vendor, holds two degrees in Mathematics & Actuarial Science after painfully fending for herself since she finished high school.

Narrating her story in an interview, Doris indicated that she holds a Bachelor’s Degree in Mathematics after which she went ahead to study for an MSc in Actuarial Science, both at the Kwame Nkrumah University of Science and Technology.

Doris grew up in Koforidua-Kukurantumi and had her primary education in Rose’s School Complex after which she attended Akim Commercial College JHS, all of which are in New Tafo Akim.