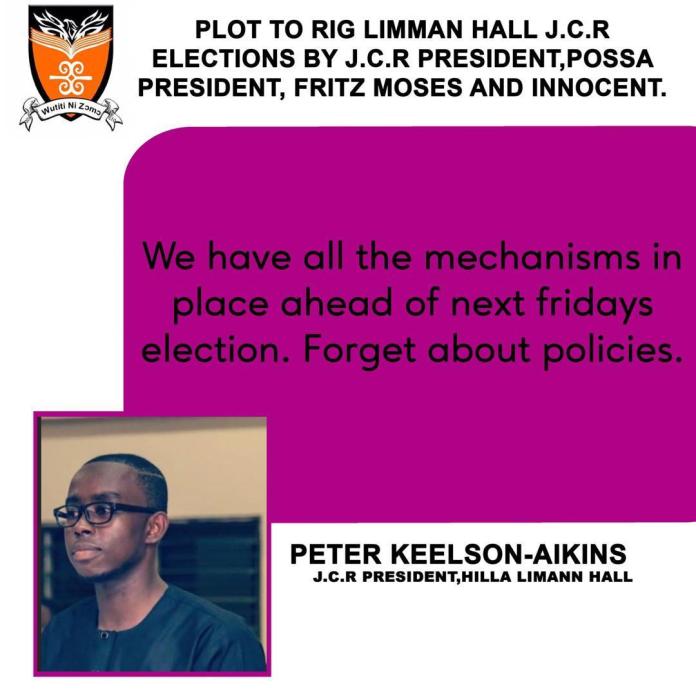 As Hilla Limann is planning to conduct its elections online in order to keep the affairs of the hall in order, a tape has come out in which the outgoing J.C.R President of the Dr.Hilla Limman Hall, Peter Kofi Keelson-Aikins, with some students were allegedly plotting to rig the upcoming J.C.R elections to favour a particular candidate.

In the leak, Mr.Keelson-Aikins and Fritz Moses, a UGSRC 2020 aspirant are heard assuring the candidate of a victory and boasting of having the mechanism in place to give the candidate a win. He was also captured on tape admitting that, they[Rigging Committee] have the vetting committee who will be doing their will. He assured the candidate of a smooth election with the help of “Breezy”(David Quaye, President of the Political Science Students Association).

Again in the audio, Mr.Keelson, is heard saying loud and clear that, the POSSA President, Mr.David Quaye is sitting on the committee, with other members who are purposely there to do the bidding of the J.C.R President [and his people].

The JCR President also made a shocking revelation that “Innocent has got management in his pocket. He has gone to see all the members of the board management, from tutor to mistress to administer to the chief porter and all the porters”. This shocking revelation by the formerly known President of Integrity has raised questions about the fairness of elections in the hall and other elections involving the Hall Management, Innocent, David Quaye and him, the JCR President, Peter Kofi Keelson Aikins.

According to this tape, the porters will give information from the opposing camp to the candidates of his[Keelson-Aikins] choice.

Listen to the voice notes below

ALL COLLEGES OF EDUCATION ADDRESS AND PHONE NUMBER December 2022

University Of Ghana Notice To 2022 Applicants