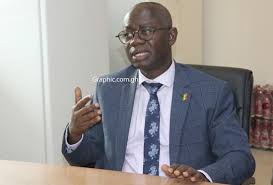 The Director-General of the Ghana Education Service (GES), Prof. Kwasi Opoku-Amankwa, has directed that a Mathematics tutor of the Kade Senior High Technical School (SHTS) in the Eastern Region, Mr. Evans Yeboah, be interdicted.

Mr. Yeboah, who was the invigilator of the Integrated Science paper in the ongoing West African Senior School Certificate Examination (WASSCE), which was written last Monday, used his position to engage in examination malpractice.

The directive, which took immediate effect, automatically bars the teacher from functioning as an invigilator at the WASSCE, pending the outcome of the investigations into the act.

Prof. Opoku-Amankwa explained that Mr Yeboah had to step aside for the investigations to be carried out so that he would not interfere in the process.

Mr Yeboah has been granted police enquiry bail by the Kade Police.

“He took a snapshot of the question and sent it outside for someone to solve and send the solution back to him via WhatsApp,” the GES boss stated.

He said the decision to interdict the teacher was to signal to stakeholders and the general public that the GES management would not countenance any misconduct irrespective of the person involved.

Prof. Opoku-Amankwa said the GES was determined to ensure that the examination was devoid of any malpractices, indicating that “anyone who acts contrary will face the music”.

The Director-General expressed worry that such activities were still taking place in spite of the strongly-worded letters that were sent to district and regional directors of education to relay to all the schools.