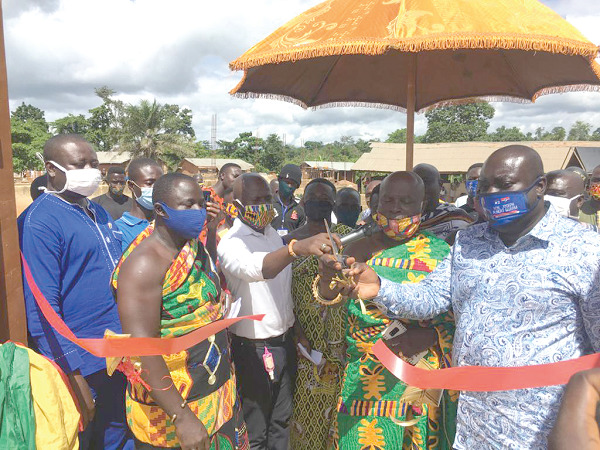 Five six-unit classroom blocks have been inaugurated for some deprived communities in the Manso Nkwanta Constituency in the Amansie West District in the Ashanti Region.

Each of the school blocks is furnished, and has a toilet facility, with an adjoining mechanised borehole and a poly tank to consistently supply water to the schools.

The Member of Parliament for Manso Nkwanta, Professor Joseph Albert Quarm, last Thursday, together with some dignitaries, inaugurated the classroom blocks in separate events at the various communities.

Also present were the District Chief Executive of the area, Nii Lantey Oleenu, and some officers of the Ghana Education Service (GES).

One of the 6-unit classroom blocks

READ: Returning To Campus Not Compulsory For All Final Years

Speaking at the ceremony, Prof Quarm noted that the facilities were funded through the Ghana Education Trust Fund (GETFUND) and reiterated the government’s commitment to making education more accessible to the people, especially those in deprived areas.

He expressed gratitude to the sector minister, Mr Mathew Opoku Prempeh, for the instrumental role he played towards the realisation of the projects.

The MP urged the school authorities to ensure that the facilities were put to good use.

The District Education Director, Mr Kwabena Owusu, in a speech read on his behalf, commended the government for its numerous infrastructural projects in the district.

He said with the new classroom blocks in place, it would help eliminate the shift system in the schools, which was the case due to inadequate infrastructure.

For his part, the Chief of Pakyi Number Two, Nana Baffour Kofi Adjei, hailed the government for its continuous support to the people.

He, however, appealed to the government to fix the deplorable road network in the area, which he said had adversely affected economic activities in the area.