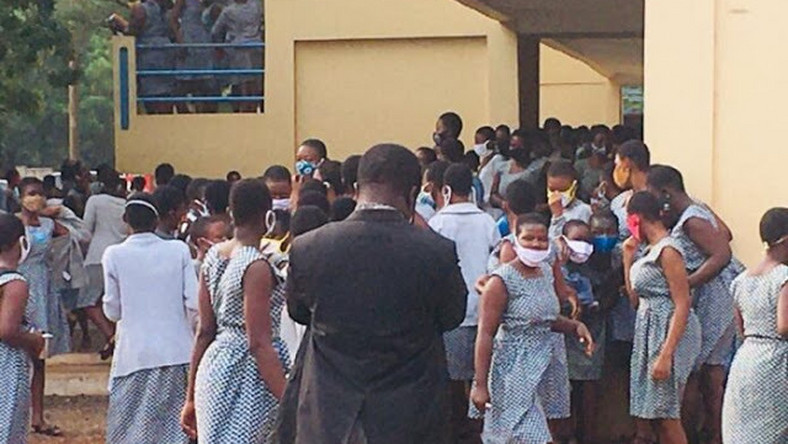 Fifty-five (55) students of the Accra Girls Senior High School have tested positive for COVID-19, a joint statement by the Ghana Health Service and Ghana Education Service has announced.

The July 13, 2020 statement indicated the cases were recorded after 314 persons including students and staff of the school were tested. 259 persons, however, tested negative.

The statement noted that similarly, a few other schools have reported sporadic cases that have not to experience a surge, but the schools were not mentioned.

According to the statement, there has been identification and segregation of contacts from other students.

”There has been sample collection and laboratory testing of all contacts identified and suspected cases.” the statement said.

”All confirmed cases have been transferred to designated national isolation and treatment centres for management.” bIt said.

The statement indicated there has been a restriction on the number of students that attend dining at a particular time.

The statement also said there has been enforcement in Social Distancing Protocols, enhanced hand hygiene and proper use of the facemask.

There has also been total disinfection of the school with an adequate supply of Personal Protection Equipments for health workers designated on the campus.

”Education on COVID-19 prevention and control has been intensified within the school the statement said.

The statement also said there has been counseling and psychological support being provided to the students. The statement said parents of affected students have been duly informed of the situation

It also said a quarantine and isolation center has been designated in the school. It also indicated the staff of the school have been assured.

Calls for the closure of schools

There have been many calls by various interest groups on the government to close down schools to prevent the spread of the coronavirus among the student population, but the government has dismissed such calls.

READ: Oppong Nkrumah Explains Why Schools Cannot Be Closed Yet

Speaking during an interview on Adom TV’s ‘Badwam’ program on Monday, July 13, 2020, the Minister said he disagreed with the calls for SHSs to be closed down and the students sent home on the back of the reported cases.

“Those of us in leadership must listen to public concerns, and be guided by the evidence in making recommendations to the President.

“Even if my child were in school at present, I would not, with the evidence as it stands, recommend to the President that schools should be shut down”, he argued.

Dr. Prempeh noted that considering that there are 721 senior high schools in the country, with a population of about 400,000 and 13 reported cases across 5 schools, the calls for the schools to be shut down were not tenable.